In this blog,  I consider whether Singapore has implemented Western ideas better than the West, which arguably has resulted in significantly improved PISA results. Based on a tweet (see below), Greg Ashman suggested I had an unusual take on Singapore’s PISA success:

(…) Katharine Birbalsingh commented on Finland’s decline in performance in the Programme for International Student Assessment (PISA) and suggested it may be due to the adoption of progressivist educational methods (it will be very interesting to see how Finland went in 2018 when these figures are released next month). Peter Ford chipped in with an unusual take (see below). 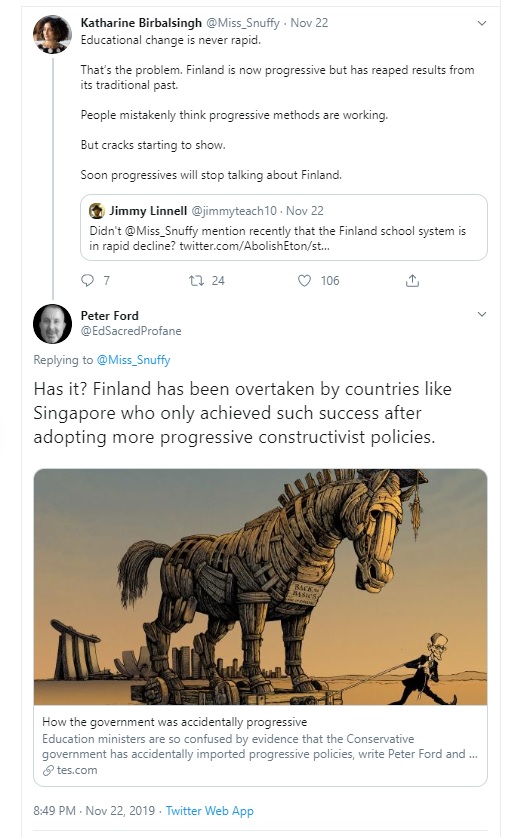 Katharine Birbalsingh‘s point was Finland’s traditional approach to education had been a factor in its PISA success, but a recent more progressive approach resulted in a decline in performance. I’m not sure it is an argument backed by the available evidence.

Singapore has arguably gone in the opposite direction. Contrary to the belief of policymakers in England, such as Nick Gibb, Singapore is not a straight forward case of a South East Asian country with a traditionalist approach to education. In this blog, I look at the two contrasting cases: Finland and Singapore.

Finland has been a high performer in PISA tests enjoying a significant rise in maths and Science from 2000 to 2006, but then suffered a sharp decline (see Figure 1) from 2007 to 2012. In the OECD’s latest Programme for International Student Assessment (PISA) ranking for 2015, Finland has fallen further (see Figure 1), though it remains a high performer. 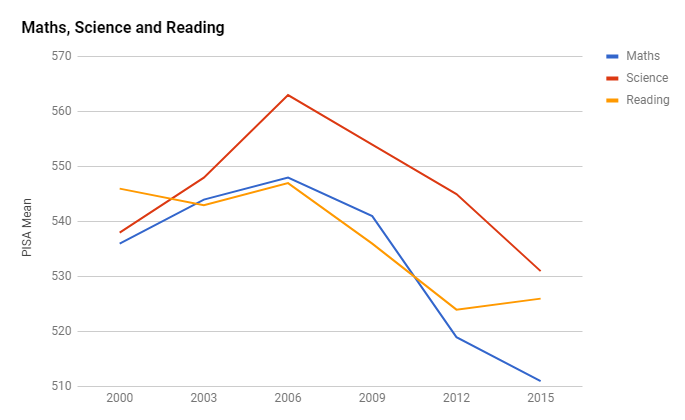 In policy terms, Finland’s rise and fall occurred in a relatively brief period suggesting the cause is unlikely to be pedagogical whether traditionalist,  progressive or otherwise. It has been suggested by some Finnish experts that the changing picture relates more to economic austerity and cuts in educational spend rather than pedagogy. I doubt anyone has an answer to such a complex policy question.

The emergence of Singapore from its traditionalist past

In the tweet, I pointed to a TES article written by myself and JL Dutaut, which contrasted schools minister Nick Gibb‘s criticism of constructivism with his endorsement of  Singapore.

Singapore previously had a  traditionalist approach but disappointing performances in international comparator studies in the early 1980s led to a major re-think. A top-down approach to planning, disseminating and enforcing education change undermined development resulting in three unhealthy trends:

Many educators in England will recognise both the traditionalist approach and the consequences of it.

The result in Singapore was:

(…) an education service that lacked autonomy, initiative and a general sense of detachment from policymakers. Within schools, teachers and children alike were mechanically fed by a bureaucratically designated and rigid curriculum. Not surprisingly, even by the mid-1980s, principals and teachers suffered from low morale.

To solve the problem, Singapore looked to best practice approaches from the West and constructivist theorists like Bruner, Vygotsky and Piaget. By the mid-90s, Singaporean students benefited from changes to the maths syllabus and the teaching of science. The emphasis placed on thinking skills and understanding concepts, rather than rote mastery of content paid dividends; the attrition rate for secondary schools decreased significantly from 19 per cent in 1980 to 3.5 per cent in 1999.

Gibb praised the outcomes of  Singapore‘s approach to maths not realising that a key principle of Singapore maths is the Concrete-Pictorial-Abstract approach based on Bruner‘s 1966 enactive, iconic and symbolic modes of representation:

in the spirit of learning from the best jurisdictions in the world for teaching mathematics, I am delighted that England’s maths hubs are currently trialling 2 English adaptations of Singapore mathematics textbooks, entitled ‘Maths No Problem’ and ‘Inspire Maths’. The feedback we are getting from teachers and pupils so far is overwhelmingly positive, not least due to the workload savings that a well-designed textbook can provide.

In effect, Gibb was importing constructivist theory from Singapore whilst dismissing it at home.

In addition to constructivist teaching techniques, Singapore adopted a social constructivist approach to leadership in the late 90s, called The “Leaders in Education Programme”. It was designed to prepare outstanding individuals for school leadership and was described by Prashant Jayapragas, from the Singaporean Ministry of Education, as firmly anchored in the “social orientations of constructivism”.

By 2004,  Prime Minister Lee Hsien Long called on teachers to “Teach Less” so that students might “Learn More” launching the TLLM initiative to encourage creativity and innovation. Its success resulted in over 40 countries, including the United States, adopting aspects of it.

Singapore seems to have used theory and evidence more effectively than in England; however, a prevailing cultural emphasis on knowledge and expertise tempered the adoption of progressive ideas.

Arguably, Singapore implemented Western ideas better than the West because it used evidence to adapt policymaking rather than using ideology to selectively cherry-pick evidence. Conceivably, Singapore’s most valuable lesson for policymakers in England does not relate to teaching approaches but how to implement policy.

It may well be that Nick Gibb‘s brand of  instructivism is working. I fully expect to see improvements in some areas in this weeks PISA results, but it is likely because it has tempered the extreme progressivism that preceded it rather than being a virtue in itself. The danger is more of it will simply replace one ideological disaster with another.

2 thoughts on “Singapore and PISA: a policy warning for England”